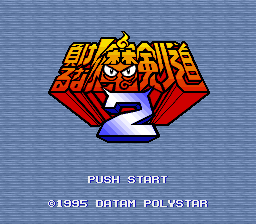 Makeruna! Makendou 2 is the second game in the franchise. This game is a sequel to the OVA and uses characters from it. A teaser video of this game was also included in the OVA.

After discovering's Mai's secret and fighting off together with Makenka against some monsters, Hikari Tsurugino, Mai's younger sister, is now also part of Doro's team to fight against monsters in the human world. She has also now recieved a special item to transform and grant her the ability to use magical power with her martial art skills. Feeling confident and excited about this, she gladly accepts the invitation from Doro to enter a tournament held in the monster world, even though Mai isn't happy about this.

The game is a 2D fighting game in which you control Hikari and have to defeat all your opponents to become the champion of the tournament. As you progress through the story mode, you will also be gaining experience points which help you level up Hikari and have better fighting abilities like more HP. It also includes a regular versus mode which lets you choose characters and put two CPUs, player vs CPU, or two players fight against each other.

All original content © 2012 - 2021 Makendou Central. This site is not affiliated with Datam Polystar in any way.